Esports, a new trend in betting 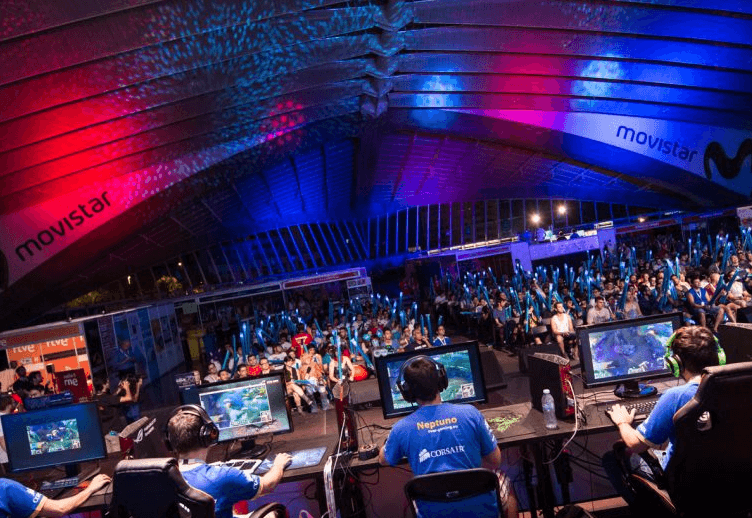 Yes, it is true that playing video games always resulted in a leisure or distraction activity. However, time has taken a turn to see these games as they have become professional sports when talking about competitions in which the most skilled players in the world participate. If you want to know everything about betting on esports, keep reading.

The esports jumped in to the world public scene recently, but in fact it is not a novelty. It has a story that exceeds a couple of decades and that was gradually brewing, evolving, until we reach what we know today.

The term esports refers to «Electronic Sports». It encompasses a world full of competitions of a series of video games in which players from all over the world participate. They have ceased to be amateurs to become professionals.

A lot can be debated about whether esports really constitute a sport. There are positions that claim that such activity does not require physical effort and that the quality of «sport» cannot be provided in the full concept of the word.

However, it is important to note that the structure that supports the world of esports is widely established. Nowadays, there is a staff that helps professionals in this branch before and after their events, as in conventional sports.

Beyond the debate, which is still happening every day, esports grow significantly day by day. Every time it manages to hook more users to this fantastic electronic world.

Many people believe that eSports came out of nowhere, but this is not so. The esports origin take us to the 70s, a decade after the birth of Spacewar, one of the first interactive games that emerged.

It was 1972 and at Stanford University the first videogame tournament was held that has been recorded in history: The Spacewar Intergalactic Olympics. Later, Atari would carry out a tournament called Space Invaders Championship. Soon after, the first online videogame of competition that is known: Netrek, would also emerge.

In the 90s, the concept of electronic sports had already reached Asia, specifically South Korea. This was the first country to provide quality athletes to these video game competitions. The first clubs began to emerge, sponsorship contracts were added, unions and this sport began broadcasting on television.

It would take a while to transcend the borders of South Korea as a professional sport but recently they have had exponential growth. Well, when using the adjective «exponential» to describe the development of esports there is no exaggeration at all.

The rise of eSports

Such has been the rise of electronic sports that in the United States of America they are already positioned among the three most outstanding disciplines, just below the Major League Baseball (MLB) and the National Football League (NFL).

Esports have recently matched the number of spectators in the United States to the NBA, the most popular basketball tournament on the entire planet and whose organizational levels are huge. In North America, electronic sports are more famous than others such as ice hockey or soccer.

There are currently several sports games that are incredibly popular worldwide. Dota 2, League of Legends, Counter Strike, FIFA or Call of Duty are some of them. These electronic sports have an excellent structure of leagues, clubs, professional players who stamp their signature on multi-year contracts, as in other disciplines.

eSports in the Sportsbook

Just as esports have had a remarkable growth of followers, it has also brought with it the insertion in the sports betting market, another activity of enormous development today. If you want, you can do sports betting 24h a day thanks to the internet and the mobile market.

Betting on electronic sports has become a trend all around the world. Currently, the vast majority of Sportsbooks include this discipline in their sports catalog, thus offering its users the possibility of making forecasts in these events.

In general, betting on esports is mainly focused around League of Legends. This game is one of the most popular worldwide. Betting on this market that is in full growth has become an activity very frequent among users.

Many punters like to forecast everything they can watch through a transmission. The fact that electronic sports have television broadcasts that they can follow through live streaming on the Internet makes electronic sports betting have become so popular.

In general, Sportsbooks usually offer the most popular games organized by leagues. The markets offered are usually quite small, actually there are not many options when betting on this modality. Most Sportsbooks offer online betting bonuses to its users to be able to play for free or with advantage.

In disciplines such as League of Legends or Dota 2 you can bet on the winner of a game. In others, such as the Counter Strike: Global Offensive when playing the best of three maps, markets with total worlds or handicaps are included. There are others quite popular as FIFA, in which very interesting markets are added such as double-chance bets.

Currently you can find Sportbooks that allow you to place simple or combined sports bets along with other sports. In many of them you can get completely live broadcasts of the most outstanding events. With this it comes the possibility of following the variation of the odds to bet in real time on your favorite.

The world of esports is wonderful and future growth is projected to be quite significant, to the point of displacing many other sports. Even in the world of online sports betting where they are already very well positioned.

Although the debate about whether or not they are a sport is still alive, it is increasingly accepted throughout the world. Many countries begin to open the doors to these competitions and seek to equate videogame professionals with athletes. The future seems to be quite promising for electronic sports and, therefore, for betting on esports. It is all a matter of waiting a little while to be able to look at everything this activity can achieve.